Schär won her first TCS New York City Marathon in 2017 after three consecutive runner-up finishes. She would go on to win the Abbott World Marathon Majors series title; earlier in the series she won her first Boston Marathon title, clocking a world-best time of 1:28:17, and then one week later won the Virgin Money London Marathon. That September, she broke the women's wheelchair world record with a 1:36:53 victory at the BMW Berlin Marathon.

Schär kicked off her 2018 campaign with her fifth Abbott World Marathon Majors race win in the span of a year, taking the tape at the Tokyo Marathon. She then went on to win her second United Airlines NYC Half and claim gold over 1500 and 5000 meters at the World Para Athletics European Championships in Berlin. She finished her season with another victory at the TCS New York City Marathon.

She entered the world of wheelchair marathoning later than many of her competitors, but she’s proven to be one of the toughest racers to beat. She’s made the podium in all five of her appearances at the New York City Marathon, and has four BMW Berlin Marathon titles to her name. At the Rio 2016 Paralympic Games, she competed in the 400-, 800-, and 1500-meter events. In 2015, Schär made her United Airlines NYC Half debut, lowering the event record to 54:38 before it was broken by Tatyana McFadden the following year. A month later, Schär was second at the Virgin Money London Marathon, which also served as the 2015 IPC World Championships Marathon.

Schär serves as an ambassador for Right to Play, an organization which helps children in disadvantaged countries take part in sports programs. 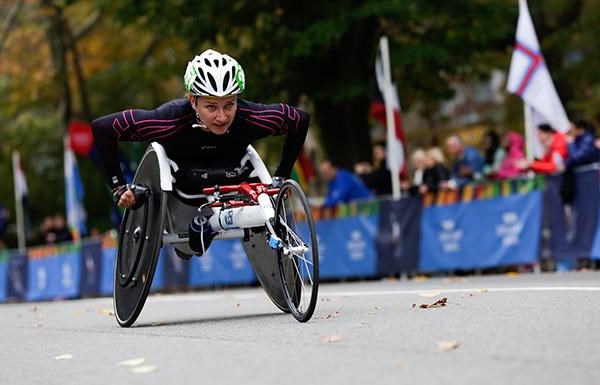