Kamworor claimed his first marathon victory in 2017 when he held off compatriot Wilson Kipsang down the final stretch in Central Park to win the TCS New York City Marathon. The 2015 TCS New York City Marathon runner-up separated himself from the field with a 4:31 penultimate mile to finish in 2:10:53. He returned to New York in 2018 to take third with the fifth-fastest time ever on the five-borough course.

The Kenyan won two consecutive IAAF World Cross Country Championships before finishing third at this year’s event in Denmark. He is also a three-time IAAF World Half Marathon champion, and in September took 17 seconds off the half-marathon world record when winning the Copenhagen Half Marathon in 58:01. On the track, he placed 11th in the 10,000 meters at the Rio 2016 Olympics, and was sixth in that distance at the 2017 IAAF World Championships in London.

Between 2012 and 2014, Kamworor recorded three consecutive sub-2:07 performances at the BMW Berlin Marathon, placing third there twice and fourth once. His 2012 race of 2:06:12 remains his fastest marathon to date. In the lead-up to that race, a documentary crew followed his training for a film titled The Unknown Runner. Earlier in his career, he served as a pacemaker for Haile Gebrselassie and Patrick Makau in their world-record runs at the BMW Berlin Marathon.

Kamworor trains in Kenya, where he used to run 5K to and from school every day. He was a hard-working student with aspirations of one day becoming a lawyer, and he was accepted to a college in the U.S. to study law, but instead decided to focus his career 100 percent on athletics. He is coached by Patrick Sang, and trains every day with the marathon world-record holder, Eliud Kipchoge. 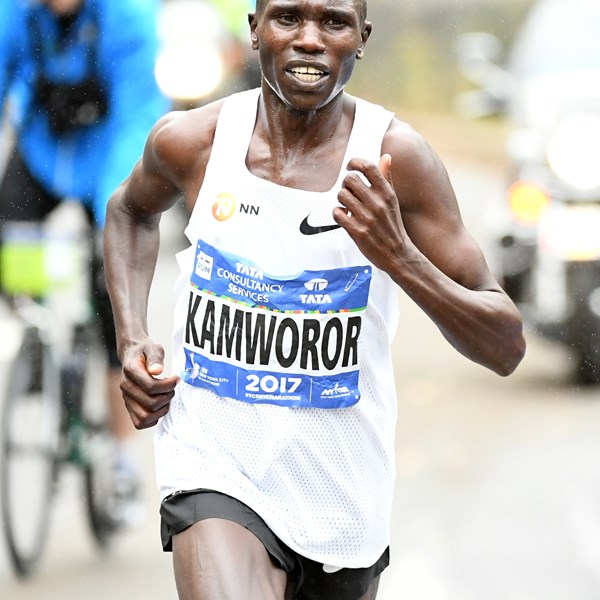