Alphonce Simbu is looking to become the first New York City Marathon winner from Tanzania since Juma Ikangaa won the race in 1989. Over the last three years, Simbu has recorded top-five finishes at the Olympic, IAAF World Championships, and London marathons.

As a teenager, Simbu was better known as a 1500- and 5000-meter runner, winning a national title over the latter distance in 2011, which was where he first came under the watch of national team coach Francis John. Training back then consisted of two runs per day every day except for Sunday, when he would rest to attend church, where for many years he was a gospel singer in the choir.

By 2015, Simbu was upping his distance, making his marathon debut that year in the Gold Coast Marathon, where he finished sixth in 2:12:01 to earn a spot at the IAAF World Championships where he took 12th in 2:16:58. That performance qualified him for the Rio 2016 Olympics, where he moved through the field over the closing miles to finish fifth. He marched as Tanzania’s flag bearer during the closing ceremony.

He started 2017 on a high note, winning January’s Mumbai Marathon and earning an invitation to April’s Virgin Money London Marathon, where he finished with a strong burst to place fifth in a personal-best time of 2:09:10. A few months later at the IAAF World Championships Marathon, he battled his way to third place to claim just the second medal for Tanzania in the history of the championships. 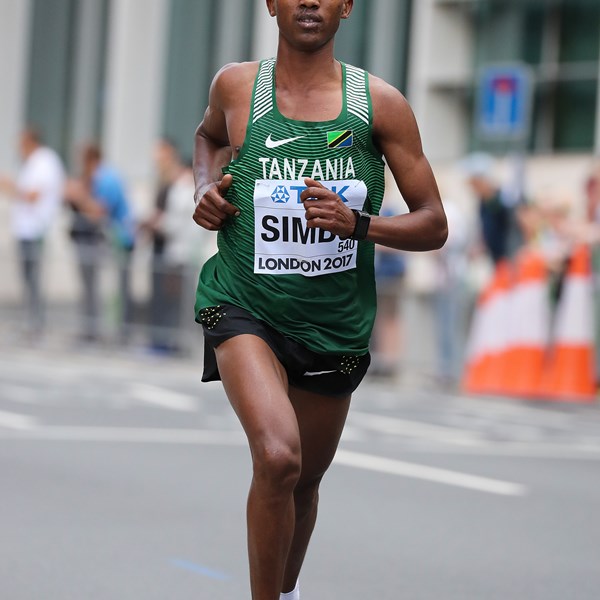