Sara Hall is fresh of running a personal-best time of 2:22:16 at the Berlin Marathon in September. In Berlin, she was the top American finisher and placed fifth overall.

The last time she raced in New York, Sara Hall claimed her eighth national title with a win at the 2019 NYRR New York Mini 10K, which served as the 2019 USATF 10 km Championships in June. It was Hall’s first national title in the distance after placing third in 2018 when the event was held at the Peachtree Road Race in Atlanta. With the victory, she became the only athlete in history to win the NYRR New York Mini 10K, New Balance 5th Avenue Mile, and the Abbott Dash to the Finish Line 5K in New York.

During her career, Hall has claimed several notable victories over shorter distances, including the Fifth Avenue Mile, Drake Relays Grand Blue Mile, and Millrose Games 1500 meters. She made two indoor track and field world championship teams and was also a member of the 2006 and 2015 U.S. World Cross Country Championship teams.

Hall made her marathon debut at the 2015 Los Angeles Marathon, where she was 22nd in a time of 2:48:02. Over the next three years, she went on to cut nearly 22 minutes off her time. She finished 10th at the 2015 Chicago Marathon, ninth at the 2016 TCS New York City Marathon, and seventh at the 2017 Tokyo Marathon. She won her first major marathon and national title in the distance at the 2017 California International Marathon in 2:28:10. She then went on to set her personal best of 2:26:20 with a victory at the 2018 Ottawa Marathon.

A native of Santa Rosa, CA, Hall attended Stanford University where she was a three-time NCAA runner-up in the 5000 meters and indoor 3000 meters, and a seven-time All-American. While at Stanford, she met her current husband and coach, Ryan Hall, who also ran for the Cardinal and went on to set the American record in the men’s half marathon. The two got married in 2005 and four years later formed the Hall Steps Foundation to help fight world poverty through better health. In 2015, they adopted four sisters from Ethiopia who share their parents’ running passion. 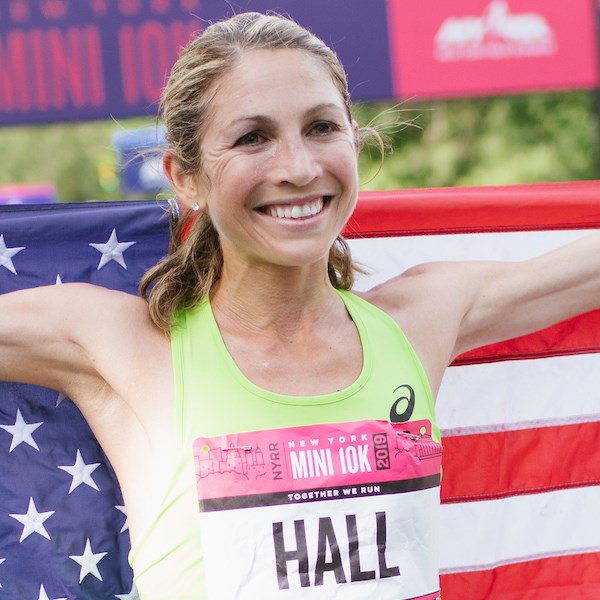